To share your memory on the wall of Charles Lloyd, sign in using one of the following options:

Charles spent is younger years living in Canada, Ohio and West Virginia predominately. Charles was a veteran of World War II and served in the United State Army Air Corps as a Sergeant and a flight instructor. He was stationed at Victory Field in Vernon, Texas. Charles was an avid traveler and saw most of the United States and many other countries as well. Charles spent is life being devoted to his five children and his grandchildren. Many in the community felt his generosity and kindness. Charles started Lloyd’s Stave Co. in Heaters, WV and has been in business for 53 years. He owned many other businesses associated with Lloyd Stave Co, including the Shell filling station and Food Store in Flatwoods, WV. All of his employees would echo his kind heart and hard work. He still went to work every day until recently when COVID made it nearly impossible. Charles was a remarkable man who made this community prosper. Charles married Shirley Ann Singleton of Burnsville in 1986 and spent the rest of his life in a beautiful marriage with so much love. He and Shirley traveled the world together and worked together for decades, relishing in laughter, singing and dancing. Charles sang many songs and always had a song for every conversation or occasion and when there was not a song he had a joke to tell you and make you smile. Every morning, he and Shirley read devotionals before breakfast. He was a wonderful father, grandfather, friend and mentor. In 2017, Charles was enshrined into the West Virginia Agriculture and Forestry Hall of Fame. He enjoyed watching Jeopardy and Wheel of Fortune every night and almost never answered a question or puzzle incorrectly. Many who knew him knew of his quick wit, his endless knowledge and love of puzzle of all kinds. He will be missed by so many and it will be an adjustment for all of us to live without him. He was a man who never asked anything if anyone but always gave whatever was needed. Generous is an understatement for Charles Lloyd. He was a brilliant businessman who would share his knowledge and experience with anyone willing to learn. He spent 98 years on Earth but he will spend eternity in Heaven and we can all rest easy knowing we will see Charles Lloyd again and one day hear his songs of joy.

Expressions of sympathy, photographs, and fond memories may be shared at Stockert-Paletti.com.

Stockert-Paletti Funeral Home and staff are honored to be caring for the Samples family during this difficult time.
Read Less

To send flowers to the family or plant a tree in memory of Charles R Lloyd, please visit our Heartfelt Sympathies Store.

Provide comfort for the family with a meaningful gesture of sympathy.

We encourage you to share your most beloved memories of Charles here, so that the family and other loved ones can always see it. You can upload cherished photographs, or share your favorite stories, and can even comment on those shared by others.

John Wilson and the Employees of Frank E. Wilson L sent flowers to the family of Charles R Lloyd.
Show you care by sending flowers

Guaranteed hand delivery by a local florist
B

Posted Nov 07, 2020 at 02:05pm
I know Charles & Shirley most recently through Lions Club. To me they represented the True Spirit of the Lions. I also appreciated Charles letting me put my political sign in his front yard “as long as it didn’t block his view.”
Comment Share
Share via:
JL

John Wilson and the Employees of Frank E. Wilson L

Posted Nov 05, 2020 at 01:21pm
Our thoughts and prayers are with you and your family at this time of loss. Mr. Lloyd was a truly remarkable man.

John Wilson and the Employees of Frank E. Wilson L purchased the Large Basket Garden for the family of Charles Lloyd. Send Flowers

Posted Nov 05, 2020 at 12:23pm
I have known and worked with Charles for 43 years. The first thing that comes to mind relative to Charles has been his easy going personality. He always had a smile and a genuine interest in others. During that entire time, I never saw him yell or lose his temper. He displayed a sense of practicality that is often missing today. He was a true gentleman and very humble in his success. I will miss Charles.

Posted Nov 05, 2020 at 11:18am
We pray for the repose of Charles soul and the consolation of his family. With deepest sympathy.

Flowers were purchased and a memorial tree planted for the family of Charles Lloyd. Send Flowers

Posted Nov 05, 2020 at 03:43am
May the love of God surround you and your family during this difficult time,
May you come to know that the love of God is with you always,

May your memories of Charles R. Lloyd, give you peace, comfort and strength…

Rest now in the arms of our Lord your mission on earth is complete.
I thank you for your service to our Country and my Freedom. You will not be forgotten.
My thoughts
and prayers to the family of …. 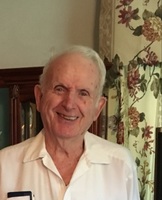